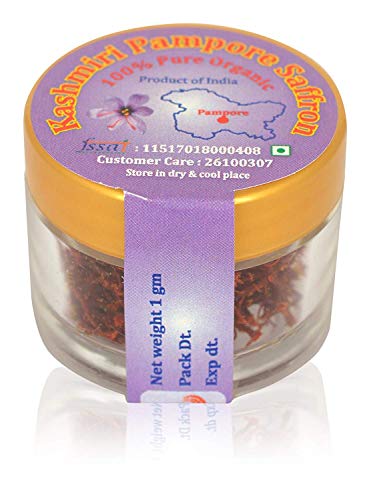 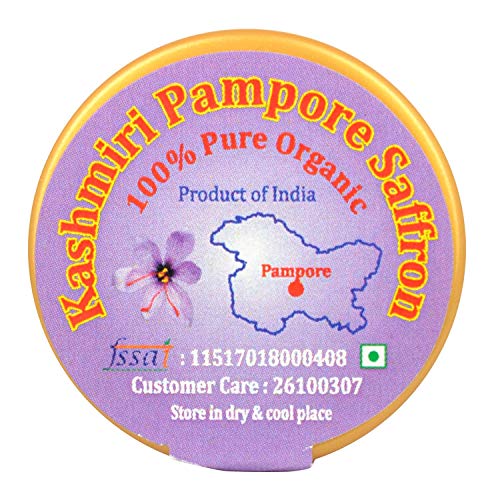 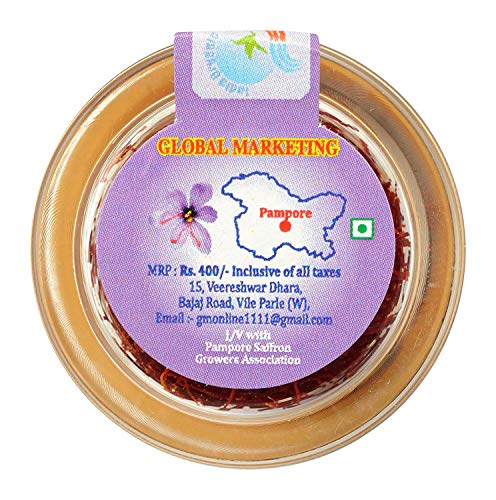 Pure, unadulterated saffron is a rare find. Derived from the beautiful purple flowers of the Crocus sativus, saffron is a rare herb that has been in use since primaeval times. Noted in ancient Greek texts for its medicinal values, saffron is a versatile spice that has a multitude of uses, including dyeing textiles and flavouring sumptuous culinary creations. Saffron is most popularly used around the world as a spice. It has a pungent, earthy aroma which instantly uplifts the existing flavour of your dishes – both sweet and savoury.

This pack of Kashmiri Pampore Organic Saffron has been harvested and sourced from a single place of origin. Pampore is one of the few places on earth where saffron is found in its purest form. The spice reached you from the beautiful valleys of Kashmir in a low-moisture form, which means you get more quantity of the spice in each gram. A powerhouse of nutrients, this spice can be added to a plethora of dishes to give them a robust flavour.

A precious, versatile spice in its purest form

Derived from the flower of the Crocus sativus, saffron is cultivated and harvested by hand. It takes nearly 150 flowers to yield 1 gram of the precious saffron spice in its low-moisture form. This pack of dried saffron threads has been sourced from Kashmir’s Pampore region – one of the few places on earth where saffron grows naturally.

Pure and natural, the Kashmiri Pampore saffron has been harvested in association with the Pampore Saffron Growers Association. Rest assured knowing that the saffron is free from any kind of additives, artificial flavouring or colouring agents.

Pampore saffron is harvested from the purple Crocus sativus flower. Growing just above the ground, these flowers are a sight to behold. But what truly distinguishes them is the rich, heady aroma of saffron which is nothing short of a noble experience. Pampore saffron naturally flaunts a rich, deep orange hue which creates magic in your kitchen, during auspicious occasions, or for your fabrics. Use this versatile spice however you want.

Rich in vitamins and minerals

Saffron isn’t just rare; it is also rich in many nutrients. This precious orange-hued spice is loaded with vitamins, especially B Vitamins, and minerals including Copper, Potassium, Calcium, Iron, Zinc, Magnesium and Selenium. Saffron can be consumed by anyone and everyone – even infants and the elderly.

This pack of dried saffron is low in moisture content, which means that it has a higher number of stigmas per gram. Harvested and sourced from a single region, this pure Pampore saffron has rich levels of Picrocrocin, Safranal and Crocin, which lend the spice its rich bitter taste, invigorating aroma and lavish colour. The spice has a high shelf-life as well. When stored in a dry place in an airtight container, it can last up to 3 years.

Uplifts the taste and aroma of dishes

Saffron is well-known for its use in the culinary arts. It is one of the most exotic spices in the world and lends any food its rich aroma and colour. Saffron can be used to create both sweet and savoury concoctions in the kitchen. It has been used since time immemorial to create mouth-watering Middle-Eastern dishes such as biryani, kebabs and tandoors. It has also been embraced in the West and pairs well with apples, citrus fruits, honey, poultry, red meat and seafood. Create your own desserts and ice cream flavours by adding a pinch of saffron to give them a whole new spin. You can also mix some saffron with some honey in milk to create a tasty nutrient-rich drink for people of all ages.